Ranked as the world's second largest, Iguazu Falls are located in South America, close to the point where Paraguay, Brazil, and Argentina join borders. The Iguazu River forms a border between Argentina and Brazil. The majority of the falls actually lie in Argentina (Cataratas del Iguazú ) and the rest in Brazil (Foz do Iguaçu ).
Depending on the time of year, there can be several hundred individual falls situated on a two mile stretch along a crescent shaped cliff. The height of the highest falls is equal to that of a twenty-four story building, about 265 feet tall. The thunderous roar can be heard from miles away.
A major highlight of Iguazu are the fourteen waterfalls that make up Devil's Throat (Garganta del Diablo.) The force of the water causes spray to rise one hundred feet and results in ever-present giant rainbows.
Iguazu Falls are a UNESCO World Natural Heritage Site. The word Iguazu come from the Native American Guarnai word for "great water." The falls were forms by volcanic activity approximately 100 million years ago.
The Iguazu falls are part of a semi-tropical jungle ecosystem. Both Argentina and Brazil have created national parks surrounding the Falls. On the Argentinean side, there are jungle trails and bird hikes. There are 500 species of birds, 80 species of mammals, and an immense variety of reptiles, fish, and insects. The butterfly population is amazing. Park wild animals include tigers, jaguars, monkeys, coatis, alligators, and crocodiles.

HISTORY
The first European to see the Iguazu falls was Cabeza de Vaca in 1542. He was on an expedition through the region populated by the Caiagangue and Tupi-Gurani Indians. In search for a river route to Paraguay, the falls presented themselves as a startling obstacle. He named them the "Waterfalls of Saint Mary" but the falls ended up being known for their original Indian name of Iguazu.
Alberto Dumont, an aviation pioneer, visited the falls in 1916, and became a champion of the drive to make the area a national park. On July 28th of that year, Alves de Camargo, President of the Province of Parana, expropriated the land surrounding the falls.

LEGEND
The legend of the falls has it that the Caigangue Indians, who lived on the bank of the Iguazu River, believed that the world was ruled by a god in the shape of a serpent named M'Boy. As the story goes, the tribal chieftain had a beautiful daughter named Naipi who was said to have been able to still the river just by gazing upon her own reflection. Naipi was promised to the god M'Boy, but fell in love with a tribal warrior named Taroba.
The day that the betrothal was to take place, Taroba stole the beautiful Naipi away, and escaped down the river. When the god M'Boy found the betrayal, he furiously drove his twisting serpant body into the ground, producing a large gorge that created the waterfalls. The eloping lovers were deluged with water and disappeared forever. 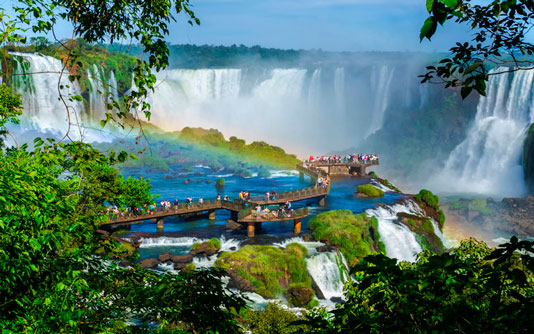 Quick drying clothing. You will get wet, you will perspire.

Hat to protect from the tropical sun and heat.

Sunscreen; it is easy to get sunburned, here.

Lots of film and memory. Wide angle lenses are a must

The morning light is best for photographs.

Vaccinations are not required, but travelers are always encouraged to be prudent in making those decisions.

Spring and Fall are the best times to see the falls. Winter has bright blue sunny skies, but lower water levels because it is the dry season. The summer is tropically hot and humid because it is the rainy season. The river is high and the falls at their mightiest, but days can be rather overcast and sometimes flooding will close some of the viewing posts and trails. But it seems no matter what time of year people go, they love the place!

DISCOVER URUGUAY's offices are located in Hartford, CT in the good old USA. We are insured and carry official status as a travel agency. Our employees and associates in Uruguay and Argentina are delighted by visits by their North American friends...